The Story Behind It All

In 1984, it was just me (Phillip), working in  the shop with my sons, Noah, who was 6, and Daniel, who was 5. A local hospital had just offered me an opportunity to do extensive cabinetwork for them.

I was overwhelmed and really scared. I had been building custom furniture and cabinets for houses, but never built cabinets for hospitals. The hospital’s administrator, Lew Mashburn, believed in me and expressed

confidence that I could do this. Lew even accompanied me to Chattanooga and secured access into some large hospitals so I could study their cabinets. 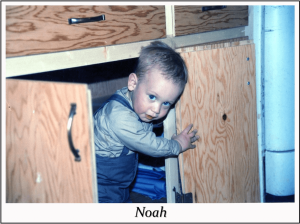 I didn’t know anything about contractors or architects, so I did what made sense to me. No one was there to tell me what was right or wrong. Because of my inexperience, many of the commonly accepted ways of doing things didn’t make sense. For example, a couple of years in, I was awarded a hospital project in another city. The contractor asked me to turn in a set of shop drawings. I had no idea what he wanted.

Getting back to the local hospital, I used the architect’s drawings, but worked directly with Lew and his staff. We avoided many miscommunications that commonly plague worksites, such as plumbing, electrical, and layout conflicts (often not discovered until during installation on typical jobs), keeping the projects on schedule, and saving overall client cost. We’d also get professional advice from the architect as needed on design and compliance issues, like fire codes and ADA cabinets.

We spent three years, full-time, building cabinets for that hospital. Since I always worked with the same people, we constantly discovered ways to improve the process. It became delightfully seamless, and we rarely experienced any push and pull tension between us.

We didn’t know we were pioneering a new and better way of doing things in our industry.

Taking It to a New Level

As the hospital project was ending, through a chain of several other projects and referrals, we started working for contractors who were building new Walmart stores. We soon had fourteen projects located in fourteen different cities, all at the same time, and for several different contractors.

Usually when a big company like Walmart wants to change something, they produce new drawings very fast. Because they made the drawings in such a hurry, I often received many details that contradicted themselves. I was supposed to take my best guess, then price and build them.

When the drawings weren’t clear, I’d send a Request for Information (RFI). The general contractor forwarded my RFI to the architect, who then contacted Walmart. In anywhere from three days to three weeks, the response came back to me. Often, I’d either get more conflicting responses, or the standard phrase I hated: “Go by the plans.” they’d say.

“But the plans conflict with themselves.” I protested.

“You can send another RFI. It’ll take a few more weeks.”

With no more direction than that, I still had to take my best guess at what Walmart wanted. Sometimes I was right and sometimes I was wrong, but it always was frustrating. What I built may or may not be what they wanted. If it wasn’t what they wanted, we redid it and shipped another one. It turned into lost time for our client and lost time and money for us. Because I didn’t want to lose this customer, I often absorbed the cost.

I said to myself, I can’t do this. We’re a small struggling business. I can’t afford to lose time, money, and my sanity on preventable mistakes and miscommunications.

I called Walmart headquarters and said I need to talk to the top person in charge of construction. I didn’t realize how stupid I must’ve come across—like Jed Clampett walking into the White House, asking to talk with the president. Miraculously I got through to Elmer, their senior architect. I guess he was intrigued by how crazy I was, so he took my call.

I told Elmer the process was a mess for those of us building the cabinets.

“If I have fourteen projects, I might have to go through fourteen contractors for answers. In two or three weeks I would get an answer…, sometimes. And I don’t always get the same answers from everyone,” I explained.

“Working for Walmart is a dream job for me and my family. We want to do good work and give you what you want so we can keep working for you.”

“What if we try this: Whenever I get a change order I’ll send it to you. You and I agree on the best solution for the revision. Then I’ll draw it and fax it to you. You stamp your approval, fax it back, and I’ll send it to the contractors for all fourteen projects, or however many projects I’m doing at the time.” 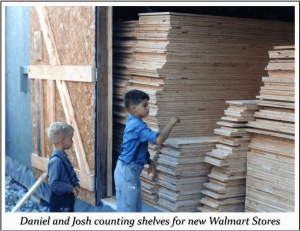 “It’s worth a try,” Elmer replied.

The first time we tried it, Elmer liked the idea. As the cabinetmaker, I understood cabinet design and materials. I could concentrate on giving them the best product, using the most efficient construction methods, and at the best cost. I collaborated directly with the decision maker to get the best outcome, and I constantly worked on improving everything.

It took a little explaining to the contractors—that I wasn’t trying to go behind their backs. I was just making the project smoother for everyone. Soon even the contractors liked it. I won everyone’s trust and could manage each project with super efficiency for them and for me. For the next several years we operated together in a workflow that saved everyone time, money and unnecessary frustration.

In total, we completed more than 850 projects for Walmart.

We began using this same approach with our other clients. When clients are building similar projects in multiple locations, they work directly with us–the vendor–from the beginning.

Many years later I learned this method originated in the early 1950’s, when Edwards Deming introduced Lean Manufacturing (Six Sigma) to Japanese auto manufacturers. He summarized his philosophy in 14 Points for Management.

End the practice of awarding business on the basis of price tag. Instead, minimize total cost. Move toward a single supplier for any one item, on a long-term relationship of loyalty and trust.

As more industries consolidate and launch multiple projects in multiple locations, our direct approach offers our clients a tried and proven method for ensuring efficiency and reliability across the board.