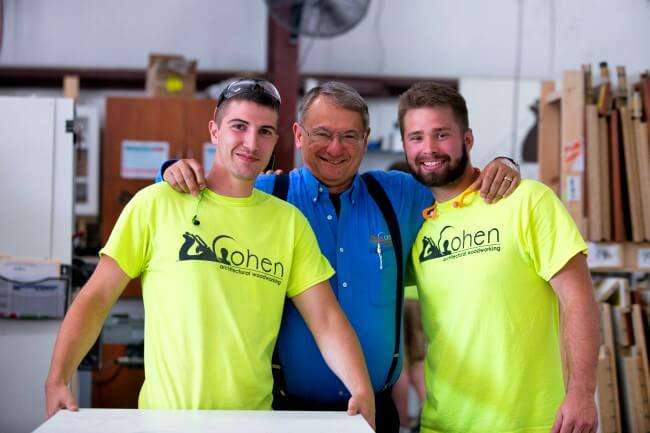 The Key to Better Business Culture: Establishing a Company Mission

CEO Phillip Cohen of Cohen Architectural Woodworking on the floor of the company’s workshop in St. James.

Phillip Cohen knows woodworking, and knows about second chances, too.

Cohen believes he got a second chance at life, and he continues to pass on his “lessons learned” to his team, many who are ex-felons and recovering drug addicts.

As opioids and other forms of drug addiction continue to grab the headlines, Cohen has developed an approach to give those struggling with substance abuse a job, and provide them an environment which focuses as much on their personal development as their on-the-job performance. “We do not discriminate about someone’s past as it relates to job opportunities. If they are willing to do the work to turn their life around we will certainly give them the chance to make it happen,” Cohen said.

“I understand the uphill path they face because I’m on that same journey.” The origins of that journey can be traced to a small, 24 x 24 house in the back hills of Tennessee. Virtually penniless, battling his father’s suicide, depression, alcoholism and drug addiction and later diagnosed with bipolar disorder, Phil moved there with his wife Gina to find healing.

Part of that healing came from woodworking. “My first experience with woodworking came in 1966 in my high school shop class. I really enjoyed working with my hands. I tried rebuilding an old guitar and putting new teeth on handsaws. It was a nice escape from all the pain I carried inside. It was something I always gravitated to for peace and tranquility.”

Cohen said his early path in life also took him to a commune where he created makeshift furniture out of wood. In his early 20s, he made soapstone smoking pipes.
Naturally, once married, Cohen once again turned to woodworking. “We turned half our little old house into a woodshop. There we made birdhouses, porch swings, baby cradles and toy trucks. I also did a bunch of carpentry work and created furniture for the home, including a bookcase, a kitchen table out of barn wood, and a wood box for firewood.”

Cohen’s early tools included a band saw, drill press and a borrowed rickety old 8” table saw. He later would purchase a Belsaw Sharpall (then called just a Belsaw) and a Foley Automatic Saw Filer to go along with some sharpening stones.

“Things really began to happen when neighbors started noticing those toy trucks and birdhouses. They liked them and wanted to buy them. I had to start honing the craft and became proficient with a number of tools.”

That proficiency helped build Cohen’s reputation. People started passing his name around and wanted him for all types of projects. It was then that Cohen realized that woodworking would be his calling. In 1982, Cohen purchased his first business license for $35. Soon, he faced a challenge. A contractor, Bencor, wanted Phil to do a project for the Boy Scouts headquarters in Chattanooga, Tennessee. The reception desk was full of curves, glass, wood and plastic laminate. The problem was that Phil, still very much a rookie in the business of woodworking, did not know how to read construction plans. He also had a deadline to fulfill and suddenly became overwhelmed. “I only had four weeks to complete the project and spent the entire first week worrying about how I could possibly execute this. Luckily, an experienced woodworker came by and showed me how to slow down and find my own pace.” The advice helped and Phil not only to complete the job but also to receive high marks for his work with the client. He also delivered the work three days ahead of deadline.

“The Boy Scouts project is one I am still most proud of. I learned that in woodworking it is more important to think like a craftsman than to worry about how fast you can get done. Once you slow down and trust your inner skills, good things will happen.” Phil also beams with pride when discussing another job for Bencor with an apartment complex in Jacksonville, Florida. “The project was extremely complicated with rooftop cupolas, fan lights and curved windows. The windows needed to look like half of a wagon wheel and involved a great amount of detail.”

He credits his wife’s knowledge of mathematics for helping him complete the apartment project. “She has a degree in mathematics and her knowledge in trigonometry really helped pull us through. Our whole basement was turned into a workshop for this. We cut each piece into segments and then put them together. They turned out almost perfectly. It took several days just to set up. I learned the importance of pre-planning, that is, setting up a job rather than pushing your way through it.” The success of the Jacksonville project increased Bencor’s enthusiasm for Phil’s work. Eventually, the contractor would land several projects with Walmart. They enlisted Phil and his young sons to do custom cabinetry for several of the retailer’s stores.

Over time, Walmart, too, became a fan of Cohen’s work. Word got around to other contractors building stores for the retail giant. Eventually, Cohen would supply customized projects for more than 850 Walmart stores nationwide.

Cohen’s journey as a woodworker was also part of a religious experience. Seeking out a a religious organization that shared his beliefs, Cohen became involved with the Mennonites. This affiliation took him on a journey where he left Tennessee, spent four years in Kentucky, and settled in southern Missouri. He would eventually drop stakes in St. James, which has been home to Cohen Architectural Woodworking for 18 years. A big turning point for the company occurred in 2013. It was then that Team-Cohen agreed to become a faith-based business. “I researched some other faith-based companies and thought this could work for us. First we defined it as a faith-based culture and as sort of a sanctuary. Woodworking is healing and therapeutic and we wanted new employees to understand our workplace is where everyone gets treated with respect.”

Cohen adds that, at any time, there could be 75 years of jail time represented by employees. This includes workers in all levels of the organization.

“We let them know they can be real and don’t care where they came from. It’s not so much about religion or being a Christian as it is developing one’s character and work ethic. They need to perform and respect our culture.”

Cohen helps team members with ongoing education and training. This includes many free classes available not just for ex-felons but for all employees.

Overall, Cohen Architectural Woodworking has developed a reputation for not only excellent design and quality products, but also fast turnaround. This was most evident when the firm was tasked in the building of two temporary schools in Joplin, Missouri, following a devastating tornado which practically wiped out the entire town in 2011.A construction company, familiar with Cohen’s work, called the firm that year in mid-June to help build the schools. They needed cabinets for the two facilities which the mayor had already proclaimed would open in time for classes in August.

Though packed with work and with other orders on the way, the Cohen team recognized the importance of this project and quickly traveled to Joplin to meet with the construction crew and architects assigned to the job. The meeting was on a Thursday and included around 15 people, and, with no time to spare, Cohen was instructed to create a plan for the cabinetry by 9 a.m. the next day. The Cohen team studied the plan in greater detail and submitted their bid. They received approval to start building cabinets for one of the schools immediately. Working all weekend, they submitted 60 pages of shop drawings for approval that Monday.

Cohen then contacted all their suppliers and told them of their need for a large amount of products for Joplin. The firm also staffed up to meet the school’s needs. By July 18, all product was on the jobsite and Cohen’s install team was ready to roll.The temporary schools came together and opened as scheduled. Cohen and his team share a special compassion and work ethic that make seemingly impossible deadline projects, like the Joplin Schools, part of the firm’s DNA.
“It all begins with people and our culture. Here, people don’t have to try to be something they are not.”

“Though everyone understands I am the CEO, we all know something about each other’s past. We operate without the phoniness that may plague other organizations. When an employee notices I am having a bad day, they can come over, put a hand on my shoulder and ask me if I am OK. The same holds true for anyone in the company.”

For all his contributions with staff as well as business growth, Phil Cohen was recognized as the State of Missouri’s 2017 Small Business Person of the Year by the Small Business Administration.

Though he no longer does woodworking himself, spending most of his time these days in staff development, Cohen is extremely grateful for the several valuable life lessons he has learned as a woodworker. “Woodworking enabled me to find focus. It requires you to slow down as you work with your hands without overstressing your mind. It’s nice to create something useful and tangible, whether it’s just for yourself or a customer. It brings a calmness to the most traumatic of situations and has helped me reach a level of success I never thought would be possible some 36 years ago, all through a second chance at life.”